Sir Alex made some real clangers in terms of goalkeeper signings during his time at Manchester United. But he also picked some of the very best in world football including Edwin van der Saar, David de Gea and Schmeichel himself.

In terms of talent, guile, tenacity, adventure and consistency could you think of a better left back than Patrice Evra? Any regular observer would surely opine that he completely wiped the floor with his excellent Premier League contemporary Ashley Cole. This was a player who suited the Manchester United style perfectly. He gave 10 years of top service to United.

For all his amazing talent TFF believes that many people still undervalue the quality and impact of Rio Ferdinand at Manchester United. He was the ultimate defender and ticked every single box that we can think of. He was very quick, had sensational feet, read the game beautifully and had the sort of aerial presence commensurate with any top centre back. Ferdinand was a truly world-class player who could have got into any team in the game.

Like Cristiano Ronaldo, Jaap Stam seemed to defy the laws of nature with his ridiculous physique and monolithic presence.

The way that he would push players effortlessly off the ball made a mockery of even some of the stronger forwards in the Premier League. It was definitely Fergie’s biggest transfer mistake to let Stam go when he was still his prime.

Played most of his career at left back for Manchester United but was right footed and hit a ridiculously good freekick for a defender.

What can we say about Ryan Giggs? The man who played for 20 years in the first team at Manchester United, made nearly 1000 appearances and still way too good to retire when he finally hung up his boots at the age of 40. TFF loves this commentary:

Hardly understated but Roy Keane wasn’t exactly the most naturally talented player that Ferguson ever bought. But his influence on the team was obvious from the moment he stepped into the Manchester United shirt from Nottingham Forest for a bargain 4 million.

More than any other player in the Fergie era he made Manchester United the most feared team in the land.

TFF’s favourite football player was a joy to watch. He didn’t look as if he had the physical prowess to be one of the best players in the world. But his football brain and technique was second to none. The fact he was overlooked by England for so long was utterly absurd.

Forget Henry and Bergkamp – this was the best and most dangerous player the Premier League has seen according to TFF. Manchester United were so lucky to have him for five years and three years in his absolute prime. He completely obliterated the opposition like a man playing against 8 year olds and you could almost guarantee a win for United every time he took to the park.

In is early career Rooney was irreplaceable and it was difficult to think of a more exciting footballer on the planet. His fizz sadly left him by his late 20s but he’s still an excellent player.

King Eric will forever remain in the hearts of the Manchester United faithful – not just because of how good he was but because of the timing of his Manchester United career which really was the catalyst for the 25 years of dominance which followed. His back heels and flicks would carve open games on a weekly basis and leave the crowd literally slavering after the deepest of WOHS. As with all true genius, Cantona made the game look so simple. 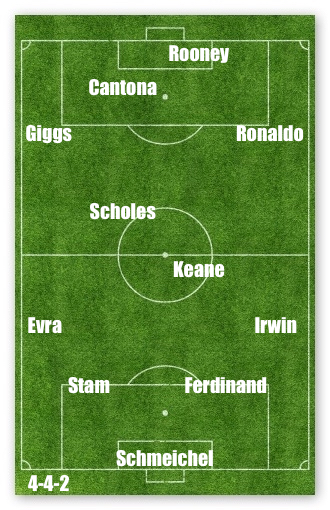