After another topsy-turvy season how Arsenal could do with an FA Cup winners medal to put some gloss on the campaign.

As usual they have regularly looked so good against mediocre opposition but come up short so often against the big boys. And it’s a seemingly unending problem for the Gunners and their fans.

They did show some real resolve against Manchester City in the semifinals of the FA Cup and got past their illustrious rivals in a thriller at Wembley. Can they repeat the trick? Well they look as if they might go with an unusual line up to combat their excellent opponents.

With Lauren Koscielny out through suspension Arsenal may go to three at the back and use the width of Alex Oxlade-Chamberlain on the left hand side with Bellerin on the right. The wingback idea could work really well against Chelsea to combat their own width from those areas.

Aaron Ramsey has been in good form of late and we like the look of him alongside Xhaka in the midfield.

Olivier Giroud may consider himself unfortunate not to be in the starting lineup for this one after scoring consistently at Arsenal all season. Danny Welbeck seems to be preferred by Arsene Wenger when fit and he has now returned to the boil after a long absence. He is clearly not as good a finisher as the Frenchman but he’s a much more dynamic player and his movement is excellent. He could be flanked by Ozil and Sanchez as Arsenal attempts to pierce the brilliant back line of Chelsea.

So we think that it could be a slightly unconventional line up for Arsenal and one that could work well against the smothering tactics of the Blues. Here is TFF’s best XI for the game. Arsenal fans: is it the wrong time to start tinkering? 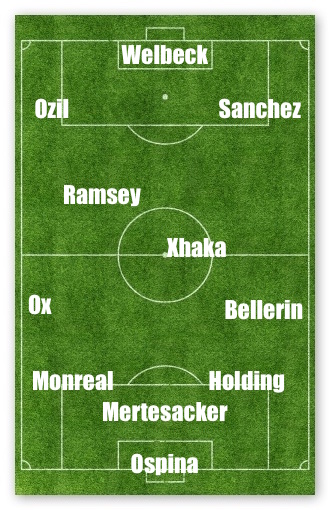