TFF believes that this will be Chelsea’s biggest challenge of the season.

They are miles clear in the title race and few would argue that they are going to stroll the last dozen games as they have found a wonderful formula for success in the Premier League under Antonio Conte.

His uber brave formation seems to be able to adapt to anything that is thrown at it. If the opponent packs the midfield then Chelsea have the numbers to cope and the width to get around the sides.

If they park the bus Chelsea have the likes of Pedro, Costa and Hazard to pierce even the most stubborn of defences.

And we believe that this formation will also stand up well to the waves of attack that will be presented next season by the likes of Barcelona, Bayern Munich and Real Madrid.

Back to Manchester United who will probably play a cautious and compact game as Mourinho is still building a side that he is totally confident with.

Rather remarkably, in what is turning out to be a dream season for the club, Chelsea have zero players on the injured list at this point.

So the big question is whether Willian or Pedro misses out. They are both in excellent form but neither will dislodge Hazard on the left.

TFF would love to see Willian play at right wing back thus squeezing all the attacking talent into the side.

So here is our adventurous XI and we actually expect Moses to play instead of the Brazilian. 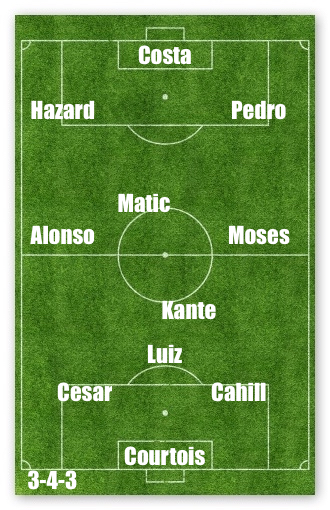