With the modern game quicker and more athletic than ever, physios tend to have their hands full with several crocked stars at all times.

But, in a classic indication of how well things are going for Chelsea right now, they currently have no players injured or suspended – a remarkable statistic indeed.

So, with a crunch clash against Tottenham to come at Stamford Bridge this weekend, Antonio Conte will surely be picking his very best XI.

And the real question is whether there is any place for John Terry and Willian.

Terry has looked sharp again in recent weeks and would still get in most sides. But Azpilicueta, Luiz and Cahill are playing so well right now that it’s hard to see an immediate way back for the Chelsea legend.

And the same goes for Willian. The Brazilian international was comfortably one of the players of the season for Chelsea last term but he simply can’t get a look in with Pedro playing out of his skin.

Others top stars like Oscar and Batshuayi are also kicking their heels on the bench right now which also demonstrates that Chelsea have a really strong squad and one easily capable of challenging for the title even when key players get injured.

So here is our line up for the game of the weekend. And it’s a very predictable one.

Chelsea fans: can you see Conte doing anything different in this game? 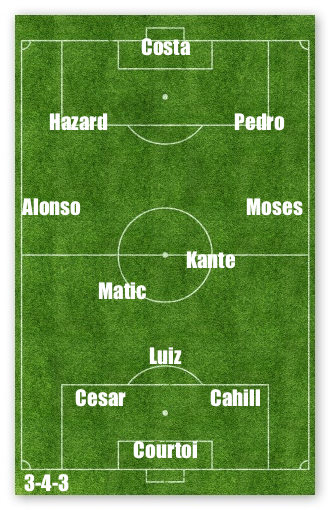