Frightening is the word that immediately comes to mind when TFF thinks about Manchester City’s summer transfer activity.

When you add the likes of the already on fire Nolito, the pace of Leroy Sane and Gabriel Jesus, the class of John Stones and the impish craft of Ilkay Gundogan to a strong squad then the Manchester City playing roster has surely never been stronger.

The question is how do you pick a strongest XI from that lot?

Perhaps even Pep doesn’t know the answer to that one but he will be fully aware that a successful season will mean 60 games so a deep squad is vital.

Starting at the front, the form of Raheem Sterling can’t go unrewarded. He still isn’t a top class finisher and the final ball isn’t at a level of someone like Arjen Robben. But the sheer pace and engine of the youngster stretches opponents and causes havoc.

Leroy Sane will have a job getting into the side right now. But he has time on his side. On the other flank, Nolito is playing too well to be benched and is adaptable and pacy enough to forego Sergio Aguero’s number 9 position for a berth out wider in a 4-1-4-1.

We may see more of a 4-4-2 in future, but the formation options for Pep are almost endless with this list of playing talent.

There is still some way to go of course in this evolution. But the fact that City are already doing the important bit – scoring loads of goals – bodes very well for their season.

So based on a canny football brain and three games watched, here is TFF’s strongest Manchester City XI with the window now closed and the business confirmed. 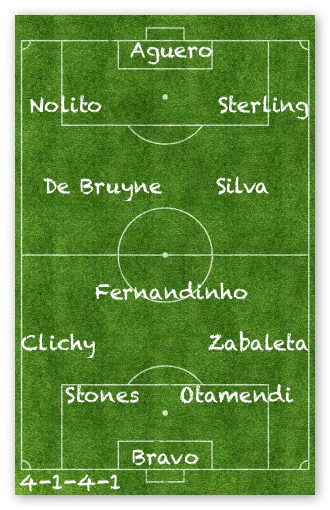