Arsenal manager Arsene Wenger will be mindful of the fact that defeat in the FA Cup at the Emirates will surely seal his fate. It’s an unthinkable prospect considering his current plight.

But recent history tells us that, after losing the crucial games of the season, Arsenal go back on a good run and finish the season strongly, persuading the board that the Frenchman is indeed the man for the job.

It’s a yearly escape act which inconveniently (for Arsenal fans) overlooks the fact that Wenger’s Arsenal teams aways buckle when it comes to the crunch. If they were my team I’d be spitting feathers about the long-term stasis. Yes, Arsenal have stability. But is that enough for one of the biggest clubs in world football?

Anyway, interminable debate aside, Wenger surely put out a really strong XI to get a big win and try to dissolve the memories of the cuffing that was meted out by Bayern Munich in their last game.

Arsenal have five on the injured list right now. Santi Cazorla’s injury has shorn Arsenal of their creativity long-term. And the hapless Danny Welbeck pulled up in the warm up before the Munich game as an omen of the night ahead.

Elneny and Ozil could be ready for a return to action, as could Iwobi.

So based on this information TFF thinks that Arsenal will field a very strong side and win by a cricket score. 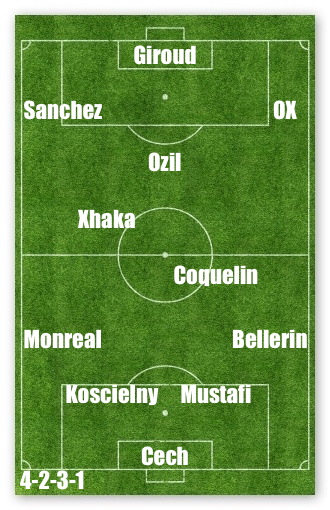