The game could have gone either way and Everton were certainly the better side in the first half.

But they ran out of steam toward the end and there was a sense in the last quarter that they were happy to hold on for a point. Despite their fatigue this felt like their big mistake.

Perhaps the introduction of Mirallas could have stretched the Reds and pushed them back a little as they increasingly dominated the final stages.

As bitter as the defeat was, three points from Arsenal and Liverpool is a decent return and Everton need to kick on over the Christmas period.

A trip to the mercurial Leicester isn’t the ideal game after a bad defeat but Everton do have a week to gather themselves as the game is played on Boxing Day at 15:00 local time. Everton fans will be buoyed by the news that Jamie Vardy is suspended.

Stekelenburg suffered a dead leg and could return for this one. James McCarthy was crocked with a hamstring injury and this should take longer to heal.

Apart from them, Bolasie, Besic and Pennington are expected to be out for some time yet.

So it’s still a good squad to pick from and Ronald Koeman will be desperate for the three points which will suggest that Everton are indeed improving.

Here is TFF’s best XI for the game. Everton fans: would you be starting Lennon? 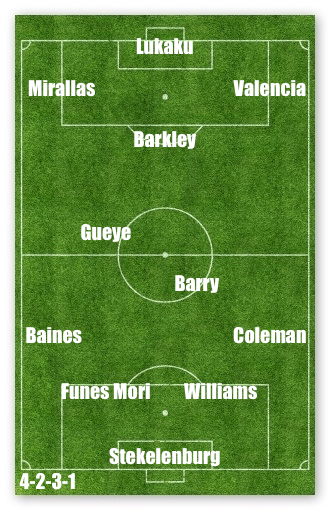