It is quite literally impossible to predict how this season will unfold for Arsenal.

Based on form and results so far you could even make them favourites for the title. They are playing the most flowing football in the league right now and some of the best in Europe.

But anyone who has observed Arsenal over the last decade knows better than to get too optimistic.

The 6-0 drubbing of Ludogorets was a game without any pressure and The Gunners always seem to do so well in those fixtures.

But it will be fascinating to see if they can do it when it matters, away from home at the big boys and on the biggest European nights.

They do look stronger through the middle and the omission of a conventional number 9 has freed up the attack even more. The handbrake was well and truly off on Wednesday with a front line of Ozil, Sanchez, Walcott and The Ox.

Aaron Ramsey and Per Mertescaker remain sidelined but it’s difficult to see either walking straight back into the team on this form.

Fatigue has to be considered. But, at this early stage of the seaosn, it would be tempting to play exactly the same XI on Saturday against a struggling Boro side – get the job done early and then rest some key players with an hour gone.

And we would love to see Oxlade-Chamberlain get a run in the side. With 3 goals in 10 games for Arsenal this season the 23-year-old looks strong and TFF has always liked him.

So here is our strongest XI for what should be a routine win. Arsenal fans: is this looking like your best side right now or would you have Iwobi in there? 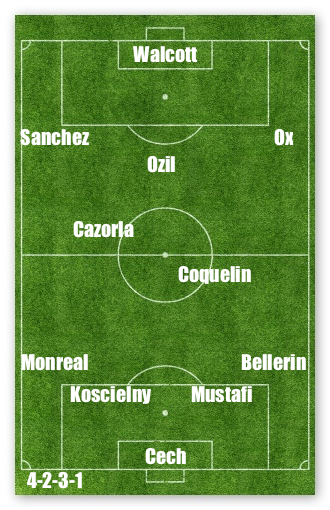