Manchester United’s midfield seems to be the subject of constant debate right now.

Paul Pogba is of course a guaranteed starter when fit. But we are still seeking an answer as to who his best partner is.

And we think that this one could be a case horses for courses.

Because when Manchester United are playing at home against lesser opposition Ander Herrera seems like the perfect solution.

United did of course draw against Stoke last weekend but, had their finishing been even half-decent, they would have run away with it as Zlatan missed a sitter in the opening minutes and Paul Pogba wasted two glorious chances.

But when the going gets tough away from home TFF thinks that Manchester United might need a more physical presence to anchor the midfield.

And with Liverpool flying right now, United will come under waves of pressure throughout the game.

But there is an alternative to the quite dreadful Marouane Fellaini.

Wayne Rooney may have lost his pace but he’s far more robust than Ander Herrera and he loves to get stuck in. The England captain is clearly angling for a move back to the midfield where he can dictate the play with his superb passing and TFF believes that he would be the perfect choice for this game.

This way Manchester United can play all their big-hitters and find a place for a player who surely still has worth to this team.

We have already spoken about how Wazza should be given 10 games in front of the defence to see if he can play the role comfortably. And surely he deserves that after his almost peerless service to the cause over the last decade.

So, providing everyone comes back fit from the latest round of dull internationals, this is the team that we believe can take the points at Anfield. 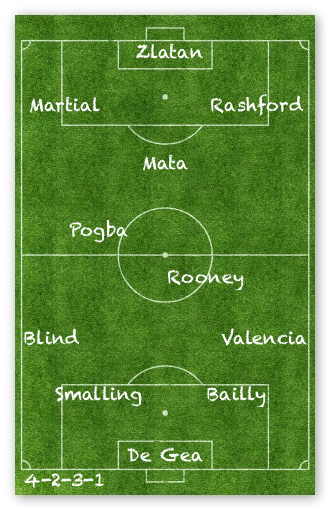