There has been a lot made about the notion that Manchester United manager Jose Mourinho doesn’t know his best XI at this point in time.

There have indeed been some rather strange selection decisions but he knows his players better than anyone outside the club and there are mitigating factors for some. For example, Henrikh Mkhitaryan has taken time to adapt after a traumatic Old Trafford bow against Manchester City in September.

LISTEN TO THE LATEST TFF PODCAST

And problems in his personal life have clearly left Anthony Martial under par.

But when everyone is fit and firing TFF believes that Manchester United’s best XI is pretty obvious.

His pace and power have been missed when he is injured and, although his defending can improve, he makes the team far more threatening going forward.

Neither he nor Smalling are necessarily the perfect partner for Bailly. But Blind has the better technique of the two.

What a superb signing.

An decent right back but one would hope that Timothy Fosu-Mensah matures quickly.

Age is not an issue with Carrick as he is still fit as a fiddle. HAS to be picked.

Needs to play in the same position every week. And with Carrick alongside him.

Manchester United have sorely missed his pace and clinical play in attack.

Will be a wonderful player for Manchester United if and when he finds his feet.

Perfect for the right wing with his pace, crossing and dribbling ability. 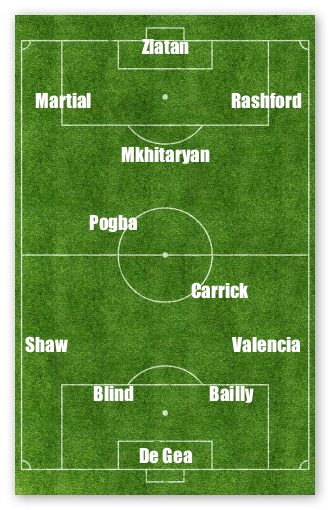