Real Madrid so nearly beat the record for consecutive wins before mid-September. But, as is almost customary for the Spanish giants, they soon descended into a mini crisis.

Four draws later and The European Champions were drawing lots of negative press and their imperious coach, Zinedine Zidane, was also being questioned.

But they have since got back to winning ways with two huge wins on the bounce – a 6-1 drubbing away at Real Betis followed by the 5-1 demolition of Legia Warsaw in The Champions League in midweek.

Incredibly, Cristiano Ronaldo has only scored one of Real Madrid’s last 11 goals but it can only be a good thing that the goals are being shared around the team.

But, in general the Bale, Benzema, Ronaldo axis remains strong and will surely intact for the weekend, fitness permitting.

Sergio Ramos, Luka Modric and Casemiro remain injured but Real Madrid have found a way to cope without those big stars and look settled and fluid once more.

Athletic Bilbao have a great tradition and will put up a fight. But few expect them to leave El Bernabeu with anything at in the late kick off on Sunday evening.

So here is TFF’s strongest XI for the game that we think Real Madrid will win comfortably.

Madrid fans: is this the strongest available XI? 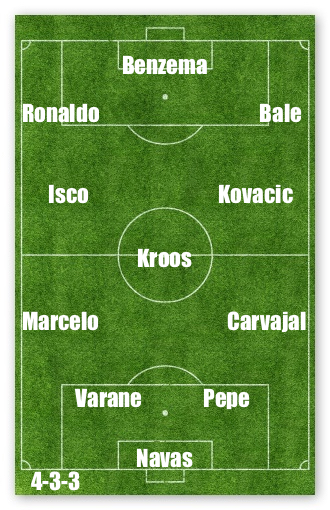