It’s been a tough old slog for Tottenham of late and although no one would call them a club in crisis, the fact that they haven’t won in 7 games will no doubt be of some concern to Mauricio Pochettino et al.

The return of Harry Kane couldn’t have come quickly enough and, even though he is clearly some way off his fittest and best, he was a menace against Arsenal. Vincent Janssen didn’t really grasp the nettle in Kane’s absence and with Sissoko also yet to really settle, the big summer spend is yet to be fully justified.

Tottenham fans will probably be relieved that Kane was spared from international action this week and we can be hopeful of more goals from the Englishman at the weekend in front of an adoring home crowd in what looks like a tasty tussle with fellow Londoners West Ham, who are also still finding their feet this season, in a tea-time kick off on Saturday.

This is no gimme and West Ham are a mercurial side who can beat the best on their day. Tottenham have slight injury concerns and will be keen to see the return of some of their walking wounded. Eriksen, Janssen, Lamela, Dembele and Alderweireld will all be assessed this week and have a chance of making the game.

Dele Alli and Ben Davies look less certain to recover from minor injuries in time for this one but Spurs still have enough firepower to overcome an improving West Ham.

Here is TFF’s Tottenham XI, injury permitting. Spurs fans: Would you all start Kane in this one? 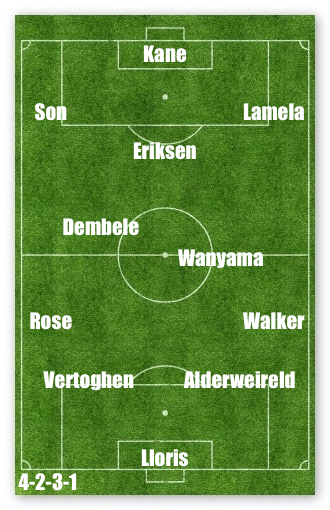