It’s always interesting to get a best XI from a Manchester United legend and Gary Neville yesterday gave his to a fascinated audience at the Oxford Union.

The headline news is that there is no room for Wayne Rooney or Zlatan in a team where pace is preferred to status.

Neville goes for a back five which includes the injured Eric Bailly and David de Gea of course gets the nod.

The midfield and forward areas get very interesting. Because Henrikh Mkhitaryan gets a start despite the fact that he has hardly been seen in the first team since he joined Manchester United.

Carrick and Pogba get a start in the two in midfield in what looks like the most balanced pair that Manchester United currently possess.

Ander Herrera is obviously a player that Red Nev likes as he is shoehorned into the side in an unaccustomed position on the right where Louis van Gaal played him a few times.

And with Martial on the left there is no room for Zlatan or Rooney as Neville goes for the pace of Rashford and Mkhitaryan up top.

It’s a side that TFF would love to see take to the field and it has more pace than a lot of the sides that Jose has put out this season.

Manchester United fans: would this be a better XI than the team which started against Swansea? 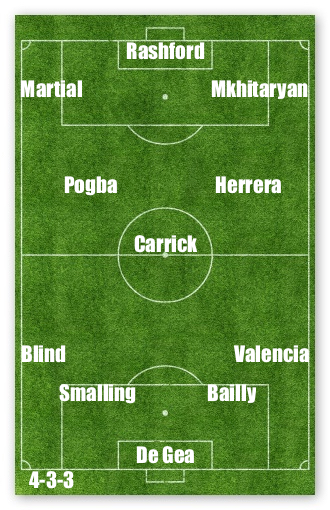