There can be few greater feelings of excitement in football than the build up to a Liverpool vs Manchester United encounter. Different cities but the common goal of English football supremacy. Both have glorious histories, a healthy dislike of each other and the tradition of attacking football.

Looking from afar Liverpool seem to be playing comfortably more convincing football right now. They were poor in the first half against Swansea but showed genuine steel in the second half to claw their way back into the game and leave with the three points.

We won’t be alone in wondering whether they have the back five to be in the title race come May. But, as we have often pointed out in the past, some of the biggest teams in the world have questionable defences and it doesn’t seem to hinder the likes of Real Madrid.

And such is the attacking potency of Liverpool right now that there is a feeling they can simply outscore the opposition, however many they let in.

That wonderfully fluid front three of Coutinho, Firmino and Mane interchange with such devastating pace and movement that defenders don’t know who to pick up.

The true tests of Liverpool’s credentials are yet to come and Manchester United will provide heavyweight, if still rather clunky, opponents.

A win for the Anfield reds will see them open up a six point gap on their rivals and what better way to start another flurry of club fixtures.

Of the currently injured, Dejan Lovren and Nathaniel Clyne are due back for this one and perhaps the major doubt is Adam Lallana, but he also has a sporting chance of making the line up. The injury to Georginio Wijnaldum, while on international duty, has also severely mite this chances of playing. The eminently able Emre Can could come in in his place.

Here is TFF’s strongest side after making predictions on injuries. Liverpool fans: is this the team to take the points? 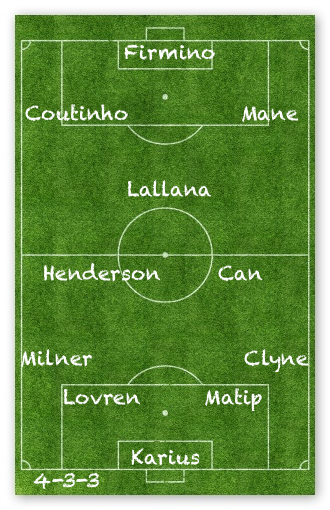