Manchester United fans will welcome back Jaap Stam with a riotous reception.

The Reading manager was one of the true defensive greats of the Fergie years and it was generally accepted that he let go of the Dutchman way too early.

Manchester United will not want to end this game with egg on their faces and Reading are flying high in the Championship so this won’t be a pushover by any means.

But it will give Jose Mourinho a chance to shuffle his pack after the chaotic Christmas season.

Players such as Chris Smalling and Ashley Young should expect some minutes after being injured and on there periphery of the squad so far this season.

Others who may get a look in are Bastian Schweinsteiger and Morgan Schneiderlin but with may well be saved ahead of potential transfers this month.

But, like it or not, Manchester United fans will probably see the Big Belgian, Marouane Fellaini, back in the starting XI.

Jose seems to be getting the formula right at Manchester United now after six straight wins in the league, which have taken United to within a point of the Champions League places. And he will want to keep that run going by putting out a strong but fresh team.

Here’s how TFF sees the Reds lining up. Manchester United fans: a good enough team to get the win? 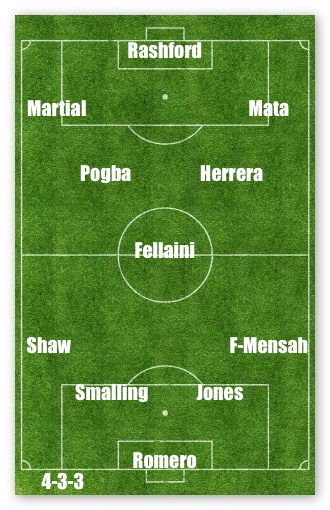