It’s been a tough and at times painful season for Manchester United fans and their new boss. But, with the summer approaching, a corner seems to have been turned.

Because, until now Manchester United have been solid without making a real statement. But the defeat of Chelsea – a well deserved and convincing win – looks to have sent the team to new heights.

The deployment of Marcus Rashford and Jesse Lingard up top was a bold move by Jose Mourinho to say the least.

Zlatan has been Manchester United’s best player this season but to leave him out of such a crucial tie was such a big call and one that paid off.

Because Manchester United have lacked pace in attack all term and this game was a nice departure from the regularly laboured and pedestrian build up play of much of this season.

But from the outset Manchester United caused Chelsea all sorts of problems with their pace. Rashford not only troubled the central three of the opponents but also got at them down the flanks and Nigeria international Victor Moses, in particular, was caught out several times.

The result was a real boost for Manchester United ahead of their Europa League quarter final second leg against Anderlecht on Thursday evening at Old Trafford.

United are in the box seat after a 1-1 draw in Belgium last week but they still have work to do against a proficient if one-paced Anderlecht.

TFF has been saying all season that we want to see more pace in this side and perhaps Jose will go for a similar line up to the weekend.

But we are expecting to see Zlatan return for his finishing ability and perhaps the return also of Anthony Martial.

So here is how we see United lining up. Manchester United fans: discuss 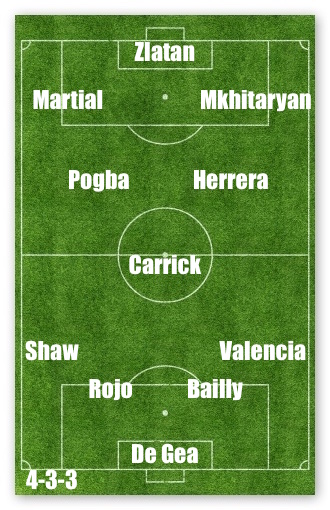