Unlike so many recent seasons, Manchester United left the rest to scramble around for last minute deals as they got their business done early. And how.

Paul Pogba came in for a world record fee and Zlatan has hit the ground running. Eric Bailly looks like one of the best signings of the summer and is already bossing the defence with what looks like effortless ease.

And Jose still has the wonderful power of Henrikh Mkhitaryan to call on. Of the new recruits, the Armenian has settled the slowest and seen few minutes so far. But his cameo against Hull at the weekend spoke of a gifted and intelligent player who will surely gain serious game time in the coming months.

And therein lies the conundrum. Unless Anthony Martial continues to struggle, there are essentially two berths for three top players. And Mourinho must decide how he slots Rooney, Mkhitaryan and the sublime Marcus Rashford into the attacking areas.

TFF believes that Rashford is too good to leave out of the side. What’s more we think that he would provide the perfect balance if he was played on the right of a 4-2-3-1 or a 4-3-3.

His pace and ball control makes him the perfect candidate for the right wing and we also believe that it would give Martial more freedom on the other side.

At the moment Juan Mata is stationed out there and he’s not exactly scaring opponents to death. So defences can concentrate more resource on shackling Martial.

Mkhitaryan would be a better option on the right but Rashford an even more exciting a solution.

In fact it may be Rooney that has most to fear from the signing of Henrikh and the emergence of Rashford.

Jose Mourinho will monitor Wazza for the first ten games of the season – he usually finds form and fitness by that stage – and if he isn’t doing the business by then at number 10 then he may find his starting position in the team under threat.

But we have always been huge fans of the Liverpudlian and believe he will thrive with the quality around him in this new Manchester United incarnation.

We would like to see an ultra attacking 4-3-3 deployed in some games, which will shoehorn in all the attacking talent at the disposal of Manchester United.

But in bigger games a 4-2-3-1 will surely be deployed with a defensive midfielder. So here is TFF’s strongest current XI with the window closed. 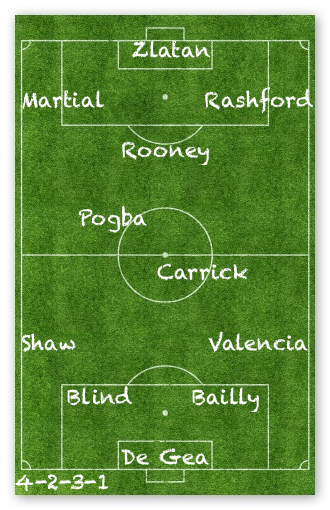