Over the last few seasons Manchester United’s campaign has petered out early as they have fallen off the pace in the league and with Europe not even in their sights.

But with the Europa League final to look forward to José Mourinho has masterminded a decent first season at the club.

And after three years in the comparative football wilderness winning this competition would represent a really successful season for the club. Not only will it be the third trophy of the campaign but they also have the golden ticket to the Champions League next season.

So Mourinho’s selection for this game is absolutely crucial. TFF believes that one of his best qualities is the ability to choose the right men for each game and also to sign top players – he has so far passed both tests with flying colours this season.

The one player who TFF has never fancied but who Mourinho clearly likes is Jesse Lingard. He has improved over the last year but he still doesn’t offer enough attacking threat to be a forward for Manchester United at the very top level of European domestic competition.

We would much sooner see Anthony Martial start in his stead but the Portuguese coach doesn’t seem to want to play Rashford and Martial in the same starting line up. Perhaps he doesn’t believe they track back enough. But Rashford will definitely start this game and the real question is whether he plays up top or on the left wing.

TFF believes that Rashford will play through the middle with possibly Mkhitaryan on the right and Lingard on the left.

We think that Manchester United will leave Martial on the bench and use his pace if necessary later in the game. That will give them the opportunity to have a really solid three of Carrick, Herrera and Pogba in the midfield. Pogba should be the furthest forward of this three where he can really push on and create chances.

The defence is looking stronger again after some serious injuries to key players. Unfortunately the recently excellent Argentine Marcos Rojo is out for this one but Eric Bailly has been the star man for Manchester United over the last few weeks and he would surely have started if he wasn’t suspended.

Manchester United will play Phil Jones alongside Chris Smalling. On the right we expect to see the indefatigable Antonio Valencia and on the left it’s a toss up between Darmian and Daley Blind. Darmian seems to get the nod in this battle most of the time.

Sergio Romero will keep his place in goal which will add to the speculation about whether David de Gea has played his last game for Manchester United. We think that the only real question is who plays in attack for Manchester United and while we would love to see Martial start, it looks more likely to be Lingard. So here is the eleven we think Manchester United will play with against Ajax and we also believe that they will win the trophy 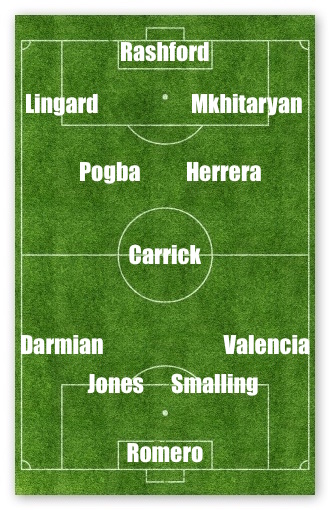