Jose Mourinho seems to be bringing the club back to the boil slowly but surely.

It is of course a squad game in what is a marathon of the season. But it took the Manchester United manager a little bit of time to work out that Michael Carrick was one of the best players in the squad.

And another detail that continues to flummox is the fact that he doesn’t start with Anthony Martial and Henrikh Mkhitaryan.

They are by far Manchester United’s best specialist wide men and until they came onto the park against Sunderland on Monday, the team looked comfortable if less than exciting.

Juan Mata and Jesse Lingard are hard-working athletes but they don’t have the dynamism of the two wingers that Mourinho introduced for less than the final quarter of the game.

When those two play it seems it is as if everything clicks for Manchester United.

They are a truly dangerous side going forward with those two and they also help to bring the best out of Zlatan by providing space for the big man.

That’s why they have to go in from the start in this game and TFF fully expects them both to play from the off as they were largely rested in the game against Sunderland.

Jose may also tweak his defense to give Phil Jones and Marcus Rojo a break before Eric Bailly goes off to the African Cup of Nations.

So here is what we consider to be Manchester United’s strongest team in a game that they will surely take another three points from at Old Trafford on Saturday.

Manchester United fans – is this the team to get over the line against Boro? 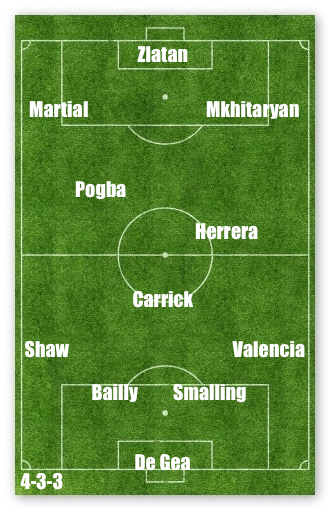