With Arsène Wenger likely to keep his job for at least another season the club will surely splurge this summer to bring another couple of top players into a side which has so much creativity but still lacks brute strength.

We believe that Arsenal could use another centre back, a left back, another midfielder and two forwards if they really want to try to compete with the likes of Chelsea, Manchester City and Manchester United next season.

On the left Arsenal have been strongly linked with Saed Kolasinac of Schalke and he looks like a really solid addition who also has pace and a wonderful delivery with that left foot. He can also play at centre back which adds another string to his bow.

In the centre we would love to see Arsenal buy a really top ballplaying centre back to play alongside Laurent Koscielny. Both will be technically excellent and a player like Rapahel Varane from Real Madrid would be a sensational option.

Arsenal are going to need somebody to replace Santi Cazorla before too long. Aaron Ramsey is an excellent player but doesn’t have quite the guile of the Spaniard. We would love to see Isco join the club this summer as part of the Arsenal splurge.

Up top Danny Welbeck and Olivier Giroud are decent and reliable players but another world-class striker could really make the difference in the biggest games. How about Karim Benzema or Kylian Mbappe?

So this is the direction we think Arsenal should take this summer and what an XI it would be. 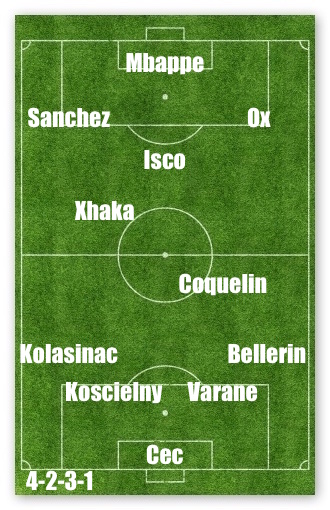