Is Arsène Wenger about to perform yet another escape act?

Certainly if Arsenal get into the Champions League qualification spots by the end of the season it could be deemed an unlikely success considering where they were just a few weeks ago.

Even as recently as last week Arsenal’s top for hopes looked in tatters but a recent resurgence and other results going for them has changed the picture somewhat. They still need Liverpool and Manchester City to slip up in their final games of the season but if Arsenal beat Sunderland at the Emirates on Tuesday night they will be putting serious pressure on their rivals.

And a likely win will put them on level points with Manchester City and one behind Liverpool with just a game to play.

And with Sunderland down and out in the Premier League this season you’d have to expect Arsenal to record a convincing win which could also improve their goal difference.

The injury picture looks pretty good with only The Ox and Koscielny doubtful and Cazorla out for the rest of the season. They’ve missed Cazorla massively but if Arsenal can get into the top four then surely Arsène Wenger will have a big splurge on transfers in the summer to try and repair his reputation.

So this is how we see Arsenal lining up and we strongly believe that they will record a convincing win to bring about a grandstand finish to the season. 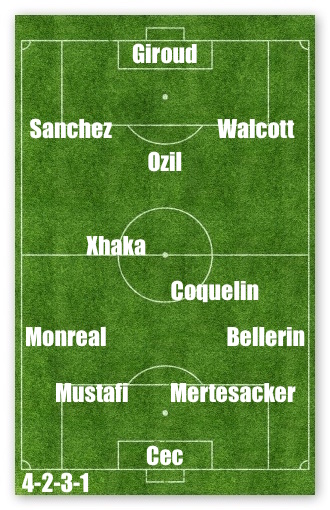