It could be a really interesting last 24 hours in the transfer window with reports suggesting that some big deals may be in the offing today and tomorrow.

And the biggest spenders could be from West London as Sky Sports report that Chelsea may try to make a stunning last minute swoop for one of the best young players in Europe. 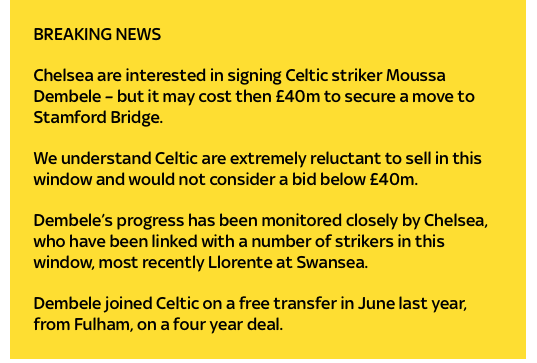 Dembele is a frightening young talent who has been superb at Celtic this season. Just 20 years of age he’s yet to play for his country at senior level but has impressed in the youth ranks with four goals in four games for the U21s.

He only signed for Celtic in the summer and has been their stand out performer with a remarkable 20 goals in 38 games in his debut campaign.

He’s got frightening pace and plays with the fearlessness and freedom of a top star of the future.

With Diego Costa’s future up in the air Chelsea manager Antonio Conte may feel that there is no time like to present to start to integrate a new forward into the club.

Dembele and Costa are of course very different players. While the Frenchman’s game is based on pace and movement, Costa is much more of a conventional number nine. But we have seen at times this season that Antonio Conte is happy to play with a false number nine and a more fluid and pacy front three when Costa has been injured or rested.

Perhaps this is his is his ultimate design for the Chelsea side.

Chelsea fans: a great deal if it gets done?