There is little doubt that Chelsea are going in the right direction under the inspired management of Antonio Conte.

They are a shoe-in for the title with just a dozen games to go in the Premier League season. And it’s not as if they are grinding out wins every week.

Chelsea have been imperious, dominant and won most games comfortably and with room to spare.

It will be fascinating to see how they cope with the now substantial XI of Manchester United in the FA Cup next week.

But they will surely invest again in the summer and reports over the weekend suggest that Conte wants to bring the brilliant Marco Reus to England.

Reus is one of the best players in Germany and, had it not been for a succession of injuries throughout his career, he would surely be up there with the top five players in the world right now.

His pace, poise, balance and intelligence mark him out as a top tier talent and Chelsea would simply have to find a way to squeeze him into the first XI if they were to sign him. The added attraction of the player is that he can fit into several formations and positions in the team.

Based on the current formation TFF believes that either Pedro would miss out or Diego Costa could leave and Chelsea could go with a false number nine in a fluid front three.

Chelsea fans: Have a look at our team and see what you think. Oh and would anyone else like to see Willian shoehorned in as a wingback next season? 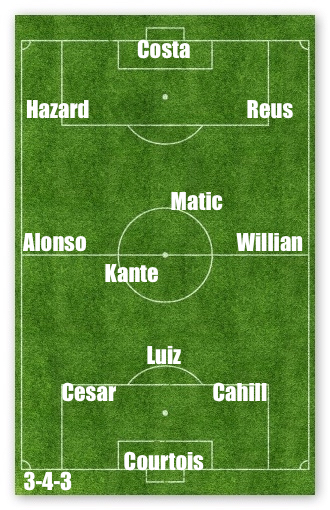