Liverpool reminded TFF somewhat of Arsenal this season. They started the campaign in blistering form and looked as if they had a real shot at the title.

But their defensive flaws were exposed in the middle of the season and Liverpool lacked mettle through the spine of their side. They couldn’t get a win for love nor money in those fallow winter months around January. But then they put together a really strong end of the season to guarantee themselves a position at Europe’s top table next term.

That would’ve been the goal at the start of the season and so that the campaign has to be seen as a success despite the obvious frailties in the squad.

Jurgen Klopp will surely look to address those this summer and they will be much stronger come next season providing he doesn’t overlook the defensive problems in the side. A new goalkeeper must be a priority and another centre back would also do nicely.

At left back James Milner can continue to fill in but a specialist wide man for that position might also help the team going forward.

But what about Liverpool’s best XI this season? The goalkeeping spot was very poorly covered by Simone Mignolet and Loris Karius but the former probably just about edged it because of his extra experience.

At left back James Milner was one of the stand out performers in the whole team and Joel Matip acquitted himself well at centre back. Dejan Lovren was the best of the bunch in terms of the other centre backs. And on the right Nathaniel Clyne put in a decent shift.

In the midfield Emre Can became increasingly prominent as the season went on and he looks like a great player for the future. Jordan Henderson was solid as ever and Adam Lallana played brilliantly when he was fit.

Up top Sadio Mane has to be one of the best Premier League signings of the season. He was on fire when he was fit and available for selection.

The other spots obviously have to go to Roberto Firmino and Philippe Coutinho. An honourable mention to Georgino Wijnaldum who doesn’t make the XI.

But here is what we believe to be Liverpool’s strongest XI for the campaign.

Liverpool fans – do you agree? 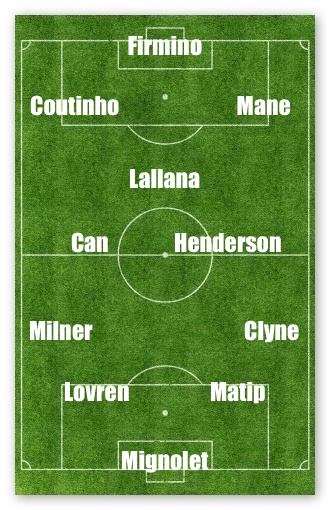