We should perhaps expect some big news in the coming hours as well respected Italian journalist, Tancredi Palmeri, has tweeted that Manchester United have now agreed a deal with Juventus for midfielder Paul Pogba.

The beIN Sports correspondent and CNN/Gazzetta dello Sport contributor tweeted earlier that all parties are now in accordance over what will be a world record transfer. 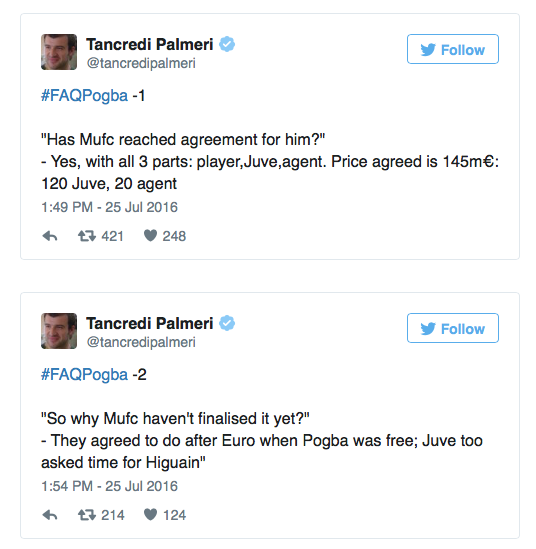 The tweet explains that the player, Juventus and Mino Raiola are now agreed on the various fees and salary offers. The fee will be around a scarcely credible 145m Euros when Juventus and Raiola have all been paid.

It’s a ridiculous sum of money for any footballer but Manchester United are desperate to land Pogba and are clearly prepared to pay Juve’s asking price.

We should state that the fee is also representative of the fact that the player is only 23. He has at least one more big contract in him after his 5 years at Manchester United. Even if he doesn’t fulfil expectations at Old Trafford over the next few years, the club can expect to get a large chunk of their money back if they decide to sell.

But that is for much further down the line.

Despite noise in the media about Real Madrid potentially showing last-minute interest in the deal, TFF still believes that Pogba will become a Manchester United player for a second time this week.

We shall of course keep you updated on any progress with this one but expect movement very soon.