Barcelona’s transfer business may have gone under the radar of some in Europe but the additions of André Gomes, Paco Alcácer, Samuel Umtiti, Lucas Digne and Jasper Cillessen among others, should not be scoffed at.

Because Barcelona have very much renewed and reinvigorated their squad with signings of an average age of around 23.

The salient question is how many of these guys will go into a team that won La Liga last season but looked a little flat in the latter stages of The Champions League?

TFF believes that Samuel Umtiti is raw but hugely talented. At 22 he may have to spend some time on the bench as Javier Mascherano sees out the final period of his career. But, before long, he will offer the power and presence that the Argentine no longer can.

Jordi Alba is still our choice at left-back and Andre Ter Stegen will get his chance to prove that he is the undisputed number 1 at Barca after Claudio Bravo’s departure.

That leaves us with the return of Denis Suarez plus the interesting additions of Andre Gomes and Paco Alcacer.

Alcacer is a wonderful player who will see lots of game time this season. But it’s still hard to imagine him starting ahead of Luis Suarez, Lionel Messi or Neymar in the attack.

So perhaps Andre Gomes is the most likely to be a first team regular straight away after this big move from Valencia. He is such a lovely player to watch and can do anything on the pitch. He likes to dribble, can pass, tackle, score and assist.

It was never going to be easy to replace Xavi, and with Iniesta also reaching veteran status Barcelona need new midfield impetus. Gomes will hope that he is the man for the job.

So, based on all that conjecture, here is how we see Barcelona’s strongest XI when everyone is fit. 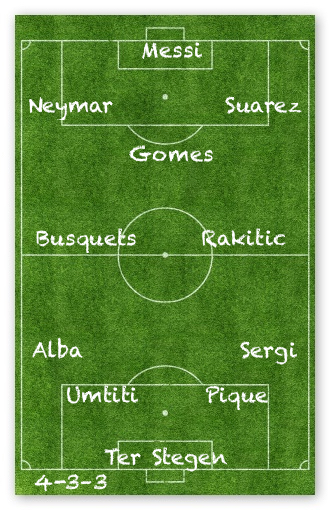