Chelsea returned to winning ways after that the crushing defeat to Tottenham in the league by getting into the next round of the FA cup at the weekend. And this could be the start of another long winning run for a team that has looked absolutely imperious for most of the season.

The manager has to take some credit for the fact that there have been so few injuries to the team this season as well. Obviously luck plays a part too and Chelsea currently have nobody on the injured list.

So the only real conundrum for Antonio Conte is whether he uses Pedro or Willian from the start. Both are in incredible form right now but with Eden Hazard playing at his world-class best on the other side only one of Pedro or Willian can usually get into the team.

TFF prefers Willian even though Pedro has been playing supremely well this season. So we’re going to give him a run in the side because he runs more than any other player and also offers fantastic penetration and width. If Chelsea don’t play him more often over the coming months he may even agitate for a move before too long.

Because a player of this quality, and a Brazil international, does not want to be sitting on the bench for large swathes of the season regardless of how successful the team is.

So here is our 11 to dispatch Leicester at the weekend. Chelsea fans: would you make any changes? 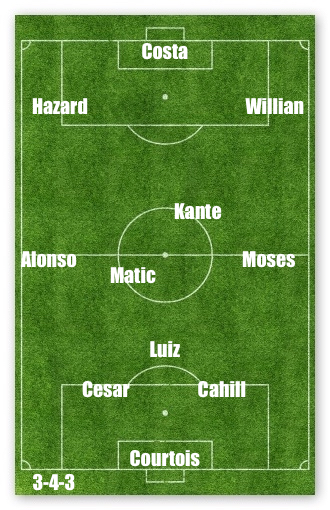