Whatever Pep Guardiola’s faults as a manager he can’t be blamed for playing to defensively. Over the course of the season Manchester City spanked so many teams but also left gaps at the back which need to be addressed in the summer – perhaps with a slight change in formation but also by adding some top wing backs.

And perhaps too much was expected of the Spanish maestro especially after Manchester City made an excellent start to the season.

Everyone expected Manchester City to win the title but that mid-season dip put paid to their Premier League plans and although they finished strongly they were well off the pace come May.

But we are licking our lips at the prospect of Manchester City’s next campaign because they are going to add a couple of top wide players and possibly some more attackers too.

They have already brought in the creative talents of Bernardo Silva and we expect that spend to be quadrupled come August.

But they still had a pretty good XI on show and although the goalkeeping position was not filled particularly professionally Claudio Bravo was still the best of the bunch.

Kolarov and Zabaleta are getting towards veteran status but they were the best full backs that Manchester City had through the season.

Vincent Kompany was excellent when he played but was too frequently injured as usual so Otamendi and Stones get the nod in the centre of defence.

Fernandinho anchored the midfield brilliantly and will continue to do so.

And the front five was best filled by David Silva, Kevin De Bruyne, Sergio Aguero, Gabriel Jesus (who put in a wonderful shift in that short spell at the club) and Raheem Sterling.

So here’s our best Manchester City XI of the season.

Manchester City fans: do you agree? 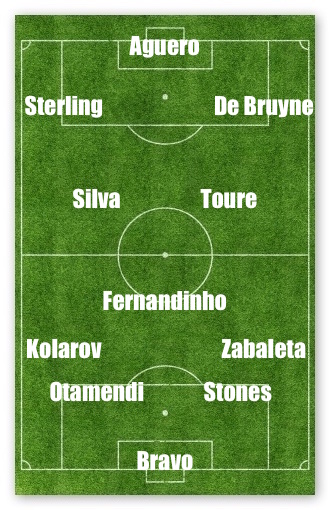