The more sceptical might suggest that the home defeat against Watford in midweek perfectly represents the long period of stasis occurring at Arsenal.

The bare facts were that this was a poor performance and result.

But Arsenal’s results have been excellent in the league and the the Watford debacle can be viewed as nothing more than a blip. An inevitable defeat among a plethora of victories.

In general Arsenal are progressing slowly but have more mettle this season and that will be tested to the full against Chelsea at Stamford Bridge in the game of the weekend.

Arsenal’s spanking of Chelsea at The Emirates in the autumn suggested very different outcomes for these teams this season. But few would now bet against Chelsea with a nine point lead with 15 games to go.

Perhaps this weekend will be pivotal. Because unless Arsenal take three points we could be talking about champions elect. That said, a draw and good results for the other rivals will reduce the gap to seven and leave an element of doubt in this Chelsea side.

But surely now is the moment for Arsenal to make a statement and reduce the gap to six. Now that would make things far more exciting.

So here is the pacy XI that we think can give The Blues a game. Arsenal are desperately missing the creativity of Santi Cazorla in the midfield but he, along with Aaron Ramsey, are crocked for this one. Apart from that it’s a fully fit squad. 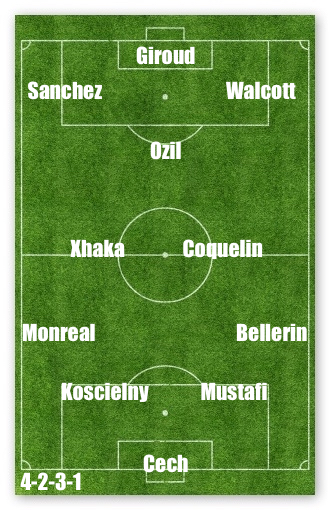