What to make of Arsenal’s game at Manchester United at the weekend? Well, unlike in times past, they didn’t completely fold. Their heads didn’t go down when they went behind and they got the point which keeps them way ahead of United and which could be vital at the end of the season.

But it appeared to TFF that Arsenal came for the draw. And, perhaps, therein lies the problem.

LISTEN TO THE WEEKLY TFF PODCAST

If Arsene Wenger truly wants to win the league a more aggressive approach is surely required. Burnley have so far taken one point on the road this season – and that came at Old Trafford. This is still not a great United side and The Gunners should have been on the front foot from the off.

Nevertheless they came away relatively unscathed and things are looking very healthy indeed for Arsenal in the Champions League.

The only question is who finishes top with both PSG and Arsenal on 10 points. A win for Arsene Wenger’s team at The Emirates will put them in the box seat for first place and this has to serve as a big incentive.

Alexis Sanchez will surely be rested and we would like to see poodle hair get more game time. Alex Oxlade-Chamberlain did what Theo Walcott failed to do with most of the match and put a clinical cross in from the right.

Olivier Giroud should take the place of Sanchez up top and otherwise we expect a pretty strong line up.

Arsenal fans: will this XI get you over the line against PSG? 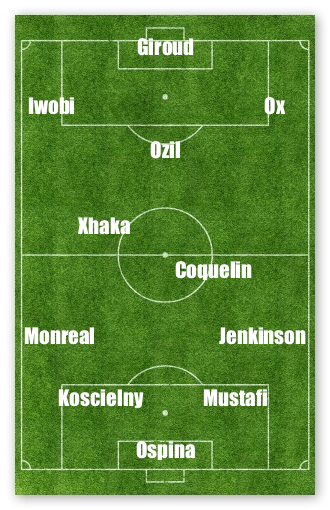