If Manchester United were playing their strongest XI then Zlatan would have to be picked.

And he may still get a game considering that there is a two week international break on the way after this weekend.

But we feel that Jose will rest him for the crucial game at Swansea this weekend, where three points are absolutely vital.

LISTEN TO REVIEW OF UNITED’S WEEK IN TFF PODCAST

So perhaps we should expect to see Wayne Rooney back in the side. But, with Manchester United struggling for cutting edge up top this season, maybe the pace of Marcus Rashford would be best employed at number 9?

Rooney can certainly still thread a decent ball through the defence and the Rashford/Rooney partnership could be just the tonic for a goal shy Manchester United.

Anthony Martial will surely come back into the side and we would sooner have the raw speed of Memphis on the other flank than the rather unremarkable Jesse Lingard. We know what the Englishman can do but Depay really needs to stretch those legs for 90 minutes.

With such poor league form The Europa League looks ever more important to Manchester United this season, as another potential way into The Champions League. So they will want to field a strong XI. But, as long as the bench is packed with quality, TFF believes that it might be a good time to give the Dutchman some minutes. There is, after all, a really good player in there somewhere.

Who knows. He might even be able to start staking a claim to a starting spot if his form improves. A front line of Rashford, Martial and Memphis on top form, would certainly be one of the quickest in the league. Throw Zlatan in at number 10 to pull the strings and we could be looking at United’s new front line.

It’s all conjecture at this stage but Manchester United have to start threatening more up top.

Here’s a tasty looking XI for what should be a fairly open encounter.

Manchester United fans: have you already given up on Memphis? 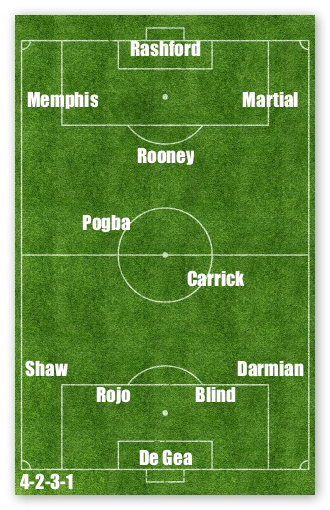