After capitulation against Chelsea it is clear that Manchester United need to stop trying to play the containment game and get on the front foot again.

There may be deficiencies in this Manchester United squad but there is no lack of attacking quality. In Marcus Rashford, Anthony Martial and Zlatan United should have a front three to fear. Yet, they seldom start together and United spend too much time reacting to the latest damage inflicted by the opponent.

LISTEN TO THE PODCAST

The best Manchester United teams shape the game themselves. The worst United teams wait for the opponent to shape the game and then chase it. And that is what has been happening for far too much of the last 4 years. United are chasing games because they set up too defensively.

Sure, there will be times when they go behind with this formula. But it’s The United Way to play attacking, quick football. Put the opponent on the back foot from the off with a blitz of forward motion and attacking intent. Force them back ten yards with their dangerous forwards so the opponent has to play with more caution.

And certainly against Manchester City, this tactic would be the perfect one to employ. Because when Manchester City played Celtic and Tottenham they didn’t like being attacked.

Jose Mourinho seems to think that all Manchester United’s problems lie in defence. But it’s this overly defensive approach which is giving the opposition a whiff of blood. United need to start scaring teams again – especially at Old Trafford.

They can start by using the pace of Martial and Shaw down the left. Get Mkhitaryan or Mata at number 10 instead of hanging Pogba out to dry there. Let the Frenchman thrust from deep as he did so well last week.

So here is an XI to take the game to City.

Manchester United fans: is this more like Jose’s strongest XI? 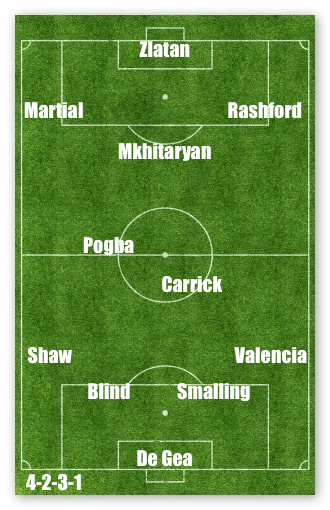