Manchester United have been linked with the services of both Antoine Griezmann and Romelu Lukaku in the latest news cycle.

The suggestion is that they can both play in the same line up alongside Zlatan Ibrahimovic.

But all three are essentially number nines so, if Zlatan does sign a new deal at the club, how on earth could they all expect to start?

The answer is that, with another season which should see 60-odd games played, the Manchester United boss will rotate his front line to keep them fresh.

But there is a way that all three could indeed play and, if they do both sign, it would be fascinating to see them line up together.

Because TFF could quite imagine Zlatan playing in a deeper role next year. He is now 35 and his lack of pace has already been well-publicised as a reason for Manchester United looking less than fluent at times.

He is the top scorer for the club and has had a magnificent season. But United are fairly predictable with him up top and they rarely get behind defenses.

If Zlatan played number ten he could pull the strings for the more pacy and powerful likes of Lukaku and Griezmann.

Perhaps Jose could play Griezmann on the left of a 4-2-3-1 in the same position that Eden Hazard occupies for Chelsea. With Henrikh Mkhitaryan on the right it makes for a really attacking line up.

That means no place in the starting line up for the likes of Anthony Martial and Marcus Rashford but it’s a great problem for Jose to have.

So here is how United could line up with all three in the team. Manchester United fans – is it a workable XI? 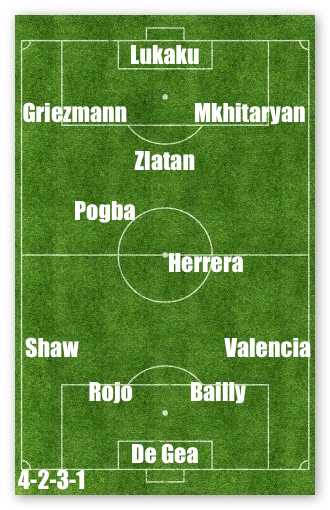