It is pretty much anyone’s guess who Manchester United will end up adding to their books this summer in terms of new arrivals. It appears almost certain that a new A-list striker will be added to the frontline.

And we seem to get speculation about Gareth Bale joining the club every summer. Bale himself seems happy in Spain but if Real Madrid decide that they want to offload him then perhaps Manchester United will finally get their man.

And although Alvaro Morata would be an excellent signing up top Manchester United fans would really be licking their lips about the prospect of Bale joining the club.

Because he seems perfect for the Manchester United way. He’s a swashbuckling winger/forward who takes on defenders with his pace and skill, is fearless and scored loads of goals. He’s in the prime of his career and TFF thinks that he would be a fantastic signing for Manchester United this summer.

TFF also believes that Manchester United will sign another defender this summer. They probably need a centre back and a full back if they are really going to compete in the Champions League. But they do have a decent complement of defenders already so perhaps the addition of one centre back – maybe Victor Lindelof or Raphael Varane could really solidify that backline and add elegance and class.

Bale usually plays on the right for Real Madrid so perhaps he would augment the front line with Morata through the middle and Rashford on the left. This would allow Pogba and Herrera to play in behind with Carrick getting another season at the club.

If United don’t bring in another midfielder TFF has no doubts that Carrick could do the business again next term.

So here’s how Manchester United could line up with particular reference to the forward line if those two did come in. 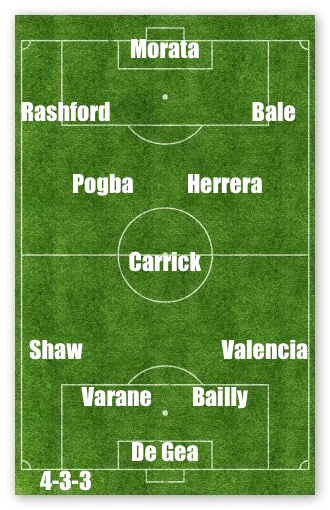