Jose’s first season will be seen as a big success if Manchester United win the Europa League as well as the League Cup and the Community Shield. This is still a team in transition and there are several areas of the squad which need obvious improvement.

Manchester United surely need a specialist right back to replace the veteran and Antonio Valencia. Valencia has had one of his best seasons at the club and while it will not be deemed an emergency to replace him, someone like Fabinho could be a brilliant driving force on that right flank.

A defensive midfielder is obviously key to Manchester United going forward. Paul Pogba has been asked to do lots of defensive work this season but surely his talents will be better served further up the pitch and that will be possible if Manchester United buy a dynamo of an anchorman. To this end, Tony Kroos would surely be the ideal solution. Failing that Tiemoue Bakayoko would be an excellent player for that area of the park.

The goalkeeping situation once more looks uncertain and perhaps David de Gea’s time at Manchester United is finally coming to an end after six glorious seasons at the club. Jan Oblak seems like a decent replacement at this point.

Then we come to the attacking areas of the pitch and Manchester United surely need to buy a couple more world-class players to put the ball in the onion bag.

The Antoine Griezmann rumours seem to have died down somewhat and Manchester United may now shift their attention to Romelu Lukaku or Kylian Mbappe. TFF believes that United should definitely go for the latter as he is an absolute sensation and a player who can become a long-term United legend.

So here is how we can see Manchester United lining up next term and it’s a mobile, pacy and genuinely scary looking forward line with a solid defence.

Manchester United fans: is this a title winning side and a team that can go all the way in Europe? 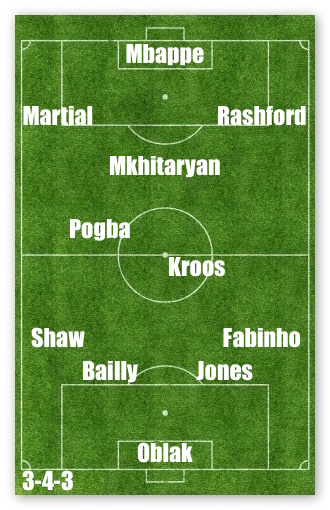