There have been a lot of games between the top sides of late and Saturday teatime provides another fabulous prospect as we enter the business end of the season.

Neither team will be particularly happy with a draw because it gives others a chance to gain ground on them in what looks as if it is going to be one of the fiercest fights for top four in years.

Liverpool currently have a long injury list but few of the crocked stars are badly hurt. Of the nine players currently sidelined Grujic, Lovren, Leiva, Sturridge, Henderson and Wijnaldum should all be there or thereabouts in terms of match fitness come the weekend.

So Liverpool may have a full compliment to pick from and they will require it if they want to find some form against Arsenal.

As for the Gunners, they have suffered a familiar blip of late with a crushing defeat in the first knockout round of the Champions League against German giants Bayern Munich.

This has led to further speculation about the future of Arsene Wenger, who seems determined to carry on in management with Arsenal or elsewhere.

His love of the club seems to be leaving him in denial about how much he has left to give them and surely now it’s time for a fresh pair of eyes after a wonderful tenure in which the Frenchman scaled up Arsenal and kept them competitive at the same time.

His immediate aim will be to keep Arsenal in the top four come May and his plight has not been helped by the prolonged absence of the brilliant playmaker Santi Cazorla. Arsenal lack creativity in his absence and Aaron Ramsey is also out. A third midfielder, Mohamed Elneny, has a chance of returning to fitness for the weekend.

So here are TFF’s strongest line ups for a clash which should offer a wonderful spectacle. 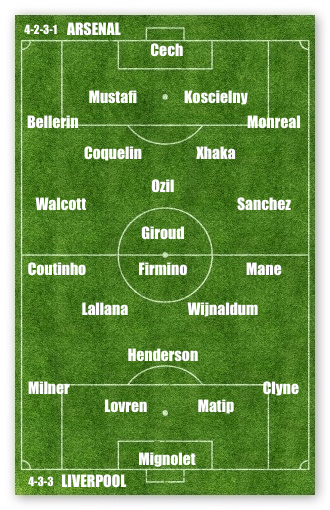