Liverpool started the season so well and looked like genuine title contenders until their defence exposed flaws in the side which were unmanageable.

Their attacking potency also suffered through the winter to suggest that they may need to add some firepower up top this summer.

But there are some wonderful raw materials to work with and if Liverpool had a stronger defence and spine in general they would surely be right up there come the end of next season.

If Virgil van Dijk could be prised away from Southampton ahead of a clutch of other top clubs the defence would have so much more solidity.

The goalkeeping situation obviously needs to be sorted out as well and surely Joe Hart would be the perfect solution in between the sticks.

Up top Liverpool have reportedly made a bid for the sensational talents of Kylian Mbappe, the Monaco striker who can’t stop scoring goals in his breakthrough campaign for the Frenchman.

Liverpool will be lucky to get their hands on him as it seems that most of the elite clubs in Europe are sniffing around.

But perhaps the promise of a guaranteed tarting role will see him rock up at Anfield next season.

So adding those three to strengthen the spine would surely have to be the priorities but perhaps Liverpool will look for a left back as well as Alberto Moreno hasn’t done the business and James Milner would be better deployed in the midfield.

So here’s how Liverpool could line up next season if the transfer market goes their way this summer.

Liverpool fans: would you be happy with this team or are other and improvements necessary? 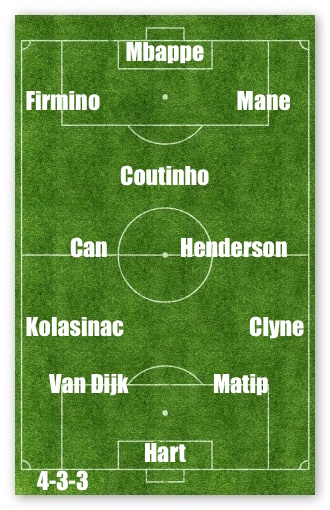