Manchester United go into the biggest game of their season so far on the back of a defeat but with key players rested.

United were humbled by Arsenal at The Emirates on Sunday after an evenly matched game was broken open by a deflected goal.

And with it went Manchester United’s six month Premier League unbeaten run. But head coach Jose Mourinho was philosophical after the game and he seems to be putting all his eggs in the Europa League basket at this point.

With Manchester United now adrift in fifth place in the league Europe seems like the club’s best route to The Champions League next term. They go into this crucial tie with a 1-0 advantage and they will surely look to turn the screw on their opponents early doors.

So perhaps we should expect an attacking line up. Wayne Rooney has come back into contention of late and could well start again in the absence of Zlatan.

TFF would love to see Rashford and Martial in tandem up top as their pace has caused real problems to opponents of late.

So the final berth in attack could go to either Henrikh Mkhitaryan or Juan Mata. The former the Armenian has dipped of late but he usually offers attacking threat and pace. Juan Mata has just returned to fitness and could offer freshness and an experienced head in attack.

Luke Shaw, Timothy Fosu-Mensah, Marcos Rojo and Zlatan will be out for this one but Manchester United still have a healthy complement of players from which to choose.

So here is how TFF thinks Manchester United should line up if they want a comfforbtale win. 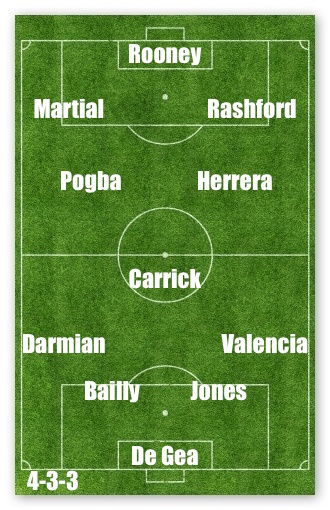