Jose Mourinho seems to be challenging Anthony Martial on a weekly basis – trying to bring out the very best, on a consistent basis, of a player whose talent is irrefutable but who remains young and mercurial.

We all want to see exciting young talents like he and Luke Shaw start every week. But Mourinho didn’t become the manager of Manchester United through pure luck. And perhaps we should give him some credit for improving the form of his squad in general.

They may not be happy to sit on the bench. But they all have point to prove when they do get on the pitch and hunger is key to a successful football team.

Martial was excellent against Wigan in the FA Cup 4th round match at Old Trafford on Sunday. If he was something of a fish out of water at number 9 in the first half he provided two assists and generally flummoxed the opposition when he was moved out to his more familiar role on the left of the attack.

Mourinho said pre-match that Martial would start again for Manchester United against Hull on Tuesday if he was ‘magnificent’ against Wigen. And we’d have to say he at least got close to that level.

So he definitely goes into TFF’s XI and it’s a familiar looking side for a must-win match in a period where Manchester United could well gain ground on a leading pack with several games against each other.

Here is what we believe to be United’s strongest XI. 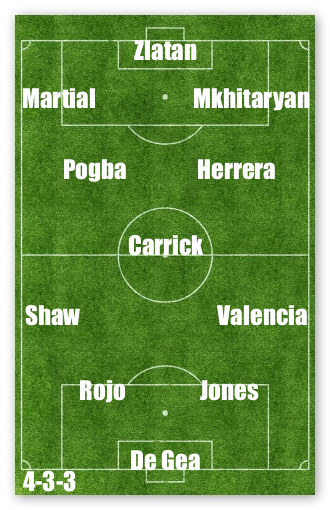