Manchester United continue in a good vein of form after reaching the semi finals of the Europa League and gaining on the leading pack in the Premier League over the last week.

But they continue to pick up injuries which also puts more pressure and strain on the fit and available players.

Paul Pogba hobbled off the park on Sunday in the 2-0 defeat of Burnley and he looks very doubtful for the game against Manchester City on Thursday with British media outlet, The Daily Mail, reporting today that the Frenchman won’t be ready for the big one.

But one of the brighter notes for Manchester United was the man of the match performance against Burnley from Anthony Martial.

He’s had a roller coaster season but his class is not in question and he showed it all on Sunday when he was deployed through the middle.

His pace and dribbling ability really unsettled Burnley and Manchester United are a better team when they have pace up top.

Rather disappointingly Jose Mourinho doesn’t appear to believe that Martial and Marcus Rashford can play effectively together and he seems to play either/or.

But TFF would love to see them dovetailing and feels that play both of them together would give each of them more space as the opponent struggles to deal with that dual point of pacy attack.

Wayne Rooney also put in a great shift at Turfmoor and perhaps his experience will be called upon against City with Zlatan out injured.

So here is our XI – Manchester United fans – is this the strongest available line up? 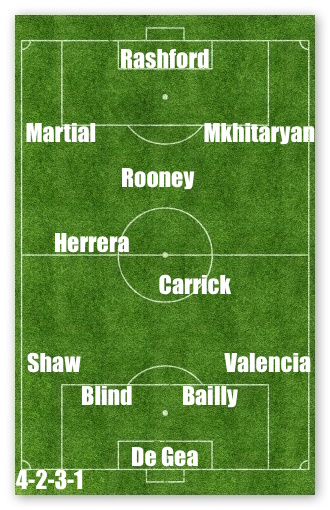