There is of course so much speculation at this time of year as to potential comings and goings.

It appeared until recently as if Manchester United manager Jose Mourinho would concentrate his efforts on the defence in January and wait until the summer to reinforce the midfield and attack.

But, after the BBC wrote this yesterday things became less clear:

Victor Lindelof: Manchester United will not bid for Benfica centre-back

It could of course be a smoke screen. A strategically publicised sound bite to get Benfica to ease their position on the value of the 22-year-old.

But the fact remains that Manchester United have performed very well in defence over the last two months.

Marcos Rojo and Phil Jones have been a big success in the absence of Eric Bailly and Chris Smalling. But if injury once more befalls Jones and Bailly is in Africa at the Africa Cup of Nations, will Jose be able to trust Smalling?

We think a move for Lindelof could still happen.

Another Benfica defender has also been linked to Manchester United of late and that is Nelson Semedo. Likened to Dani Alves for his attacking play the right back could be a perfect successor to Antonio Valencia over the next few seasons.

The Mirror has reported this week:

The market is of course fluid and ever changing and if an opportunity presents itself to sign, say, a top defensive midfielder, Jose could well bite.

But as things stand, TFF thinks that the most likely deal would be to bring the Benfica boys to Manchester United in January. And if Luke Shaw can nail down that left-back berth then the defence will have a solid but altogether more dynamic complexion.

Here is how we think Manchester United could line up come February. 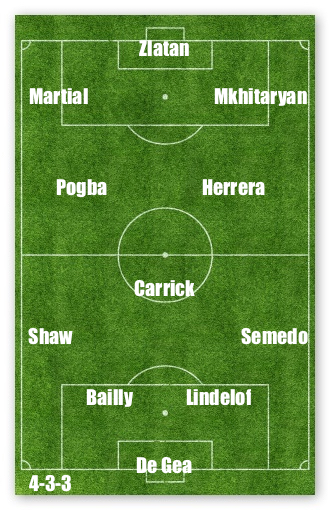