It’s difficult to imagine Chelsea strengthening their first XI too much after a blockbusting season in which they hammered most sides. The formation was brilliant, the coach even better and the players largely performed above themselves.

The big question at this point is whether Chelsea will be able to hold onto Eden Hazard and Diego Costa. If they lose those two they will have some serious rebuilding to do to get themselves back to the same level come August.

But with Chelsea on the up in general it seems as if the proposition of them staying will be attractive to both. Perhaps Costa is more likely to leave but we can see Hazard staying for at least another season.

Antonio Conte is a man who loves to build from the back and he will surely add another centre back this summer having failed to bring another one in the last transfer window. And the idea of the wingbacks has worked so well for him that we are certain he will bring another top wide man in. Beyond that an extra midfielder would help and a top striker to replace or supplement the talents of Diego Costa.

We think that Benjamin Mendy is a wonderful left back and he would fit perfectly in that Chelsea side as someone to get up and down the wing and ping in perfect crosses as well as shielding his back three.

In the centre of midfield another dynamo would be a superb addition and Monaco’s Tiemoue Bakayoko would provide even more energy than Kante currently does.

And are we to assume that Romelu Lukaku will make a hugely expensive return to Chelsea this summer? He does appear to be interesting some of the top clubs in Europe and would score goals for Chelsea for fun.

So here it is – Chelsea’s potential XI for the 2017/18 season and it looks lipsmackingly good. 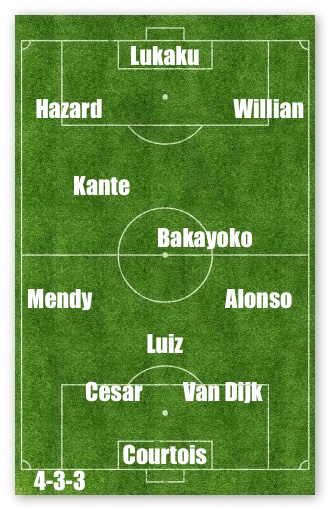