It’s a classic match up between two of the most in form sides in the Premier League and only a fool would try to predict this one (see TFF’s prediction at the bottom).

Any result is possible and even the so-called experts are going to struggle to make this call. We are going for a Tottenham win. Even though Chelsea would be slight favourites and have been the team to beat for most of the season, Tottenham are in rude health right now and they look so difficult to beat.

Chelsea may have that extra bit of class up top and Eden Hazard has possibly been the best player in the Premier League this season. But there is just such momentum about Tottenham right now and they look so confident.

Chelsea have been completely blessed this season in terms of injuries and still haven’t got any to really speak of. Alonso and Courtois were injured before the Manchester United clash but both should be available to resume their duties in Chelsea’s strongest XI.

Tottenham, on the other hand, could look at Danny Rose and Erik Lamela as genuine first teamers that won’t make the XI due to injury.

But other than that they do have a ridiculously strong team and unlike last season they look really fresh going into the final furlongs.

But they haven’t done too well at Wembley this season and Chelsea will look to exploit them in the wide areas with that unconventional 3-4-3 formation.

A couple of weeks ago we would most certainly have gone for Chelsea to win this one and Blues fans won’t like our prediction but we just think that Tottenham might have a little bit more power in the legs right now while Chelsea have stumbled of late.

But will probably get it wrong and it’s a must watch encounter. What a wonderful weekend of football we have ahead. This is how we think Chelsea will line up.

Blues fans – is this the best XI you can put out? 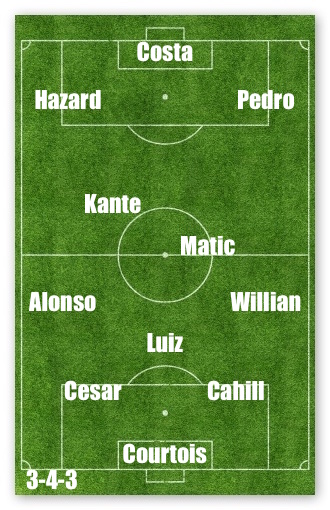