After winning seven games on the trot in the league, Arsenal have only earned three points from their last three fixtures and they need to get back to winning ways.

In the last game, the north Londoners could only get a single point vs Wolves at the Emirates and next up, they will collide against Bournemouth away from home.

Arsenal face more than a few injury concerns in their attacking department. Danny Welbeck is out injured with a long term ankle injury.

On the other hand, stars like Lacazette and Aubameyang pulled out of their respective international squads due to injury. The duo have forged a formidable partnership together this season but they are slight doubts for the game against the Cherries (The Express).

As per The Express, the likes of Lichtsteiner and Monreal are still recovering from their respective injuries and could miss the game on Sunday.

Aubameyang has mainly started on the left wing in the current campaign and if he is absent, then we can expect Iwobi to start in that position. Aaron Ramsey should start on the right wing and Mesut Ozil should start in the central attacking midfield role.

If Lacazette is unable to feature as well then Mkhitaryan should play up front in the False no. 9 role. Young Eddie Nketiah has been in top form for Arsenal’s U-23 side and he could get the not to start as well but we feel it is highly unlikely.

In the center of the park, Swiss international Granit Xhaka should start with Uruguayan star Lucas Torreira.

Here is how Arsenal should line up vs Bournemouth: 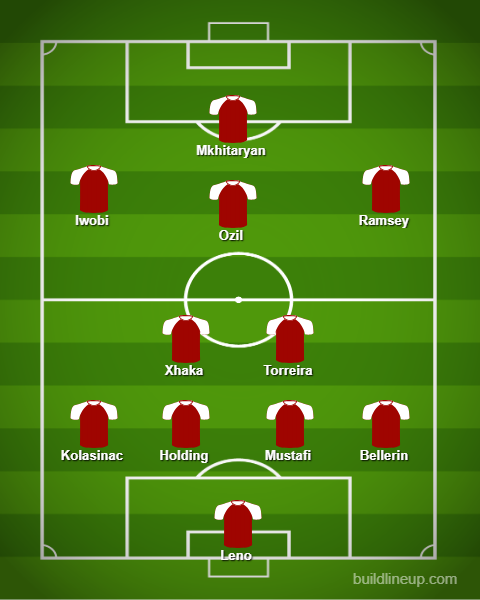