Manchester United got over the finishing line in a successful fashion after a nail biting end to the season.

More and more we speak about the Champions League as being the holy grail of football and José Mourinho delivered that to the club in his first season at Old Trafford.

Now Manchester United fans can sit back and watch as the club again reaches deep into its seemingly limitless pockets to buy some of the cream of European and global talent this summer.

The fact that they have reached the Champions League means they will have a much broader spectrum of players to choose from. So who are they going to sign?

Well TFF would suggest that they need to look at the full-back areas as well as the centre of midfield and the striking department.

We think the ideal players for the defensive areas would be Fabinho of Monico and Danny Rose of Tottenham. Benjamin Mendy would also be an excellent prospect on the left but he is seemingly interesting so many clubs that Manchester United may be better off pursuing the Tottenham left back.

The central midfield is crucial because Manchester United need an anchorman to replace Michael Carrick. Toni Kroos would surely be the ideal solution but will Real Madrid really let him go?

Perhaps another Monaco player, the brilliant Tiemoué Bakayoko, would be a more realistic option.

And latest reports have suggested that Manchester United may do brilliant business up top this summer.

Rumours this week have suggested that Gareth Bale may be on the radar once more.

If Manchester United could add him and Antoine Griezmann to the lineup then what a team they would have next season.

So here is a potential Manchester United line up for 2017/2018. United fans: Title winners? 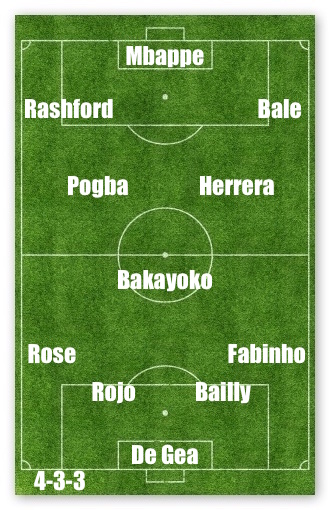